Here are three out of print Utah wilderness maps published by the U.S. Forest Service and the Bureau of Land Management. These maps were orginally printed at a scale of 1:1,000,000. The digital files are not georeferenced.

Two file formats are available: JPEG and MrSID. To view the MrSID files in a web browser, install the ExpressView browser plug-in from LizardTech. The MrSID versions are smaller and can be viewed more efficiently.

Roadless and Undeveloped Area Evaluation II (RARE II) 1979
This map accompanied the Forest Service RARE II Final Environmental Statement. It depicts national forest roadless areas in Utah as of 1979 (these boundaries have since been revised). The map indicates which areas were recommended for wilderness designation, non-wilderness management, and further planning (an in-between category). At the time, Lone Peak was the only designated wilderness in Utah. The map also shows the boundary of the High Uintas Primitive Area, established in 1931. 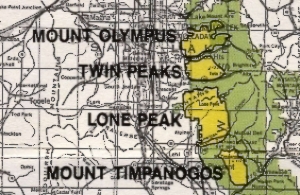 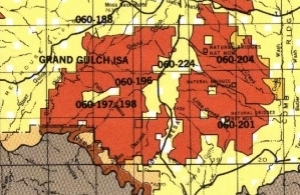 State of Utah Wilderness Status Map 1992
The BLM published a series of wilderness status maps during the late 1980s and early 1990s, reflecting changes in wilderness study area boundaries as the result of the appeal process. This is the last in the series, and it reflects the wilderness study area boundaries and wilderness recommendations made by the BLM in October 1991. The status of BLM wilderness remains essentially unchanged since then even though a revised inventory was conducted by the BLM in 1999. One important change: the Wrigley Mesa/Jones Canyon WSA on the Colorado border northeast of Moab has since been designated as part of the Black Ridge Canyons Wilderness.